The abundant waters off the vacation paradise of Puerto Vallarta offer anglers some of the finest Offshore Fishing on Earth. Situated on the coast of Banderas Bay (known locally as "Bahia de Banderas"), Puerto Vallarta is the ideal departure point for an exhilarating day of Deep Sea Fishing. The downtown marina is ideally located between the northern and southern capes of the Bay.

Excellent Offshore fishing can be found in the surprisingly deep waters of the Bay. The deepwater trenches just outside of the confines of Banderas Bay in the Pacific Ocean are some of the best waters to land that trophy Marlin or Tuna. The Marietas Islands offer the closest destination for excellent Deep Sea Fishing. Situated at the mouth of Banderas Bay, this locale is ideal for a short excursion or for a party on a budget. Often charters can fish near Tres Marietas on the way to the deeper water of El Morro, located just outside the shelter of the Bay. El Morro is the best spot to land a trophy catch without the travel time and expense of journeying to Corbetena or The Banks. Considered the top overall place to fish Offshore in the region, Corbetena is worth the journey for serious anglers. You'll have ample opportunity to hook Tuna, Marlin, Wahoo, and Sailfish at Corbetena. At the southern edge of the Bay, El Faro can attract more of the same species found at Corbetena during certain times of the year. The Banks are more than fifty miles from Marina Vallarta, but worth the haul. This area in the Pacific is known for huge trophy fish, especially Yellowfin Tuna and Marlin.

A fantastic amount of feisty game-fish can be found just an hour or two from the modern facilities of Marina Vallarta where our vast fleet of charter boats is docked. Depending on the season, you'll have the chance to land a number of species, including Striped Marlin, Blue Marlin, Black Marlin, Dolphin Fish (known in Hawaii as Mahi Mahi or in Mexico as Dorado), Sailfish, Swordfish, Wahoo, Yellowtail, Sharks as well as Albacore, Yellowfin, Big Eye, and Bluefin Tuna. Although each species runs better at certain points in the year, fishermen will always find spectacular Off Shore Fishing off Puerto Vallarta throughout the year.

Our tourney-tested captains have the understanding of the waters off Puerto Vallarta to make sure your party enjoys a fruitful Deep Sea Fishing charter. Our charming bilingual crew will supply tips and instruction, as well as the best gear and fresh bait. 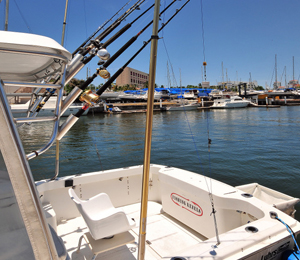 The 25-foot Luhrs comes powered with twin deisel 210 HP engines, allowing this compact and modern vessel to cruise out to sea at up to 18 knots. This is great for navigating the wide open waters of the Banderas Bay and the Pacific Ocean. 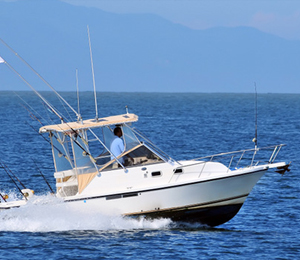 Equipped with a 240 Horsepower Yanmar Diesel engine, this compact yet comfortable vessel can ride at speeds of up to 18 knots. 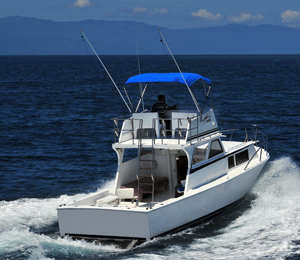 This large and spacious Custom 36-foot classic crafted hull top can take up to 8 anglers out to the waters of the Banderas Bay for a fishing trip that is consistently rated as one of the top fishing trips in Puerto Vallarta. 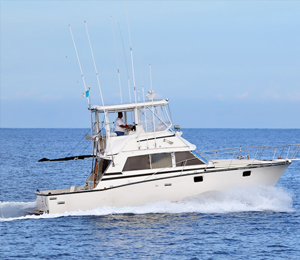 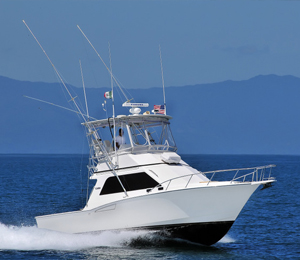 Our 35-foot Cabo can technically only take 6 anglers, but the space and comfort of this vessel is one of the main reasons our guests choose this vessel. The 35-foot Cabo is definitely up there when it comes to class, style, and luxury. 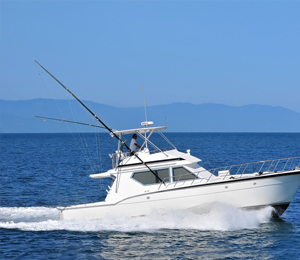 Hatteras yachts are known for being some of the most luxurious boating vessels in the world. Now with our 46-foot Hatteras, you can enjoy the luxury of Hatteras while experiencing a top-notch Puerto Vallarta fishing adventure like never before!

Our Promise To You

WE WON'T BE BEAT ON PRICE!

To prove it we are matching all online pricing on the tours we offer.